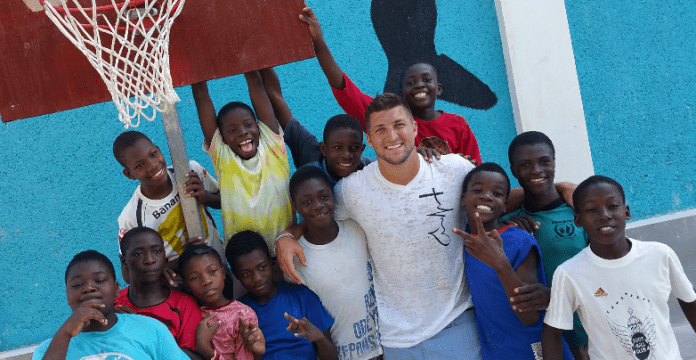 The son of missionary parents, Tim Tebow grew up with a heart for service and a love for orphans. Born in the Philippines, he spent his early childhood there, quickly becoming accustomed to sharing his faith and the good news of the Gospel. After moving to Florida as a child, Tebow returned to the Philippines as a teenager, spreading God’s Word and doing the Lord’s work by serving the needy. He carried that calling with him to the University of Florida, spending his spring breaks on missions trips continuing to share the Gospel message.

It was this foundation of faith that inspired him to start the Tim Tebow Foundation in 2010 to bring faith, hope and love to those needing a brighter day in their darkest hour of need.

The foundation has been in existence for six years now, and it operates with seven main outreach initiatives:

The W15H Program was put in place for children with life-threatening illnesses whose wish is to meet Tebow. During a W15H experience, the child is treated to four days of personalized VIP experiences. Each detail of the W15H is designed specifically for each child. From limo rides to their favorite activities, to their favorite meals, candy and gifts, all the surprises along the way make each experience unique and personal.

Another way the foundation cares for children in need is through Timmy’s Playroom in children’s hospitals across the country and internationally. Timmy’s Playroom provides an atmosphere that allows children to take their minds off their medical treatments and just be kids again. Each playroom is completely customized with a football field floor, football chairs, custom wall graphics, an arts and crafts table, specially built lockers, a Bible verse banner and a Jumbotron entertainment center, stocked with the latest video games, DVDs and electronics.

Orphan Care, one of the outreach initiatives of the Tim Tebow Foundation, links Tim’s heart for orphans back to his time spent serving abandoned children in the Philippines during his youth. The foundation provides care for orphans in four countries, supporting life’s essentials, such as food, clothing, housing, medical care and education, allowing them to be nourished both physically and spiritually with the Word of God.

Tebow’s love for the Philippines also inspired the construction of the Tebow CURE Hospital, providing life-changing surgeries for deserving children of the Philippines who could not otherwise afford care. The hospital performs orthopedic procedures, healing children afflicted by cleft palate, clubfoot, bowed legs and other bone deformities. Like those provided for though the Orphan Care program, children served by the Tebow CURE Hospital receive both physical and spiritual healing.

The TTF also provides Adoption Aid grants to families who are making the courageous choice to internationally adopt children with special needs. These grants enable them to bring children with special needs home to their forever families, but also to provide assistance for them to receive the proper medical care they will need once they arrive home.

“When I was 15 years old,I began to realize the FIGHTINGIMPORTANCE offor people who can’t fight for themselves.”

The foundation’s newest initiative offers yet another way to reach the special needs community on a global scale. Each year on Valentine’s Day weekend, the Tim Tebow Foundation sponsors Night to Shine, an unforgettable prom night experience, centered on God’s love, for people with special needs, ages 16 and older. In its inaugural year, 44 churches hosted proms across the country and around the world. In its second year, Night to Shine saw 450% growth, with 201 churches, representing 23 denominations, hosting proms in 48 states and seven countries, where 70,000 volunteers celebrated more than 32,000 honored guests, each one king or queen of the prom.

“This is a night for each and every guest to have an unforgettable night and feel like a king or a queen,” said Tebow. “We want them to know that they are loved and that this is how God sees them every day!”

Every guest of Night to Shine enters this complimentary event on a red carpet, complete with a warm welcome from a cheering crowd and friendly paparazzi. Once inside, guests receive the royal treatment, including hair and makeup stations, shoe shining stations, corsages and boutonnieres, a karaoke room and, of course, dancing! It’s a night for the guests to truly shine, the volunteers to shine, the Church to shine but, most important, for Christ to shine!“

We are honored to be able to work with so many churches across the country and around the world to impact the lives of people with special needs,” said Erik Dellenback, executive director of the Tim Tebow Foundation. “We hope that the movement of Night to Shine not only transforms the way we think about Valentine’s Day, but also launches or enhances ongoing special needs ministries within churches around the world, providing a place where our honored guests can go and be celebrated and loved throughout the whole year.”

“We want to see a change in the narrative,” said Tebow, “and we believe that is what is happening here in our country and around the world.”

Through Team Tebow and Tim Tebow Kids, the TTF encourages people to go out in their communities and be the hands and feet of Jesus to those in need, and through movements, like Night to Shine, the foundation has seen a shift in the focus of volunteerism. Now, volunteers are getting plugged into serving within the church, and specifically serving the special needs communities in their areas.

“When I was 15 years old, I began to realize the importance of fighting for people who can’t fight for themselves,” said Tebow. “As a foundation, everything we do boils down to two concepts: serving children and sharing God’s love.”

TIM TEBOW is a two-time national champion, first round NFL draft pick, and Heisman trophy winner. He is currently a college football analyst for the SEC Network, which launched in August 2014. He appears mainly on the SEC Network as co-host of SEC Nation, a traveling pre-game show. Tebow also contributes to a variety of ESPN platforms including SportsCenter, ESPN Radio, and the network’s Heisman Trophy coverage, offering in-depth perspective as a legendary SEC player himself. Prior to joining the SEC Network, Tebow played three years in the NFL for the Denver Broncos, New York Jets and New England Patriots. In 2011, Tebow was the first quarterback featured in ESPN’s “Year of the Quarterback” series. He later released Through My Eyes, which was named the #1 sports book of 2011 and the bestselling religion book of 2011. For more information on Tebow, visit www.timtebow.com.

The Tim Tebow Foundation exists to bring Faith, Hope and Love to those needing a brighter day in their darkest hour of need. That mission is being fulfilled every day through the foundation’s seven areas of outreach, including W15H, Timmy’s Playroom, Orphan Care, Adoption Aid, the Tebow CURE Hospital, Team Tebow and Night to Shine. For more information on the Tim Tebow Foundation, please visit www.timtebowfoundation.org.