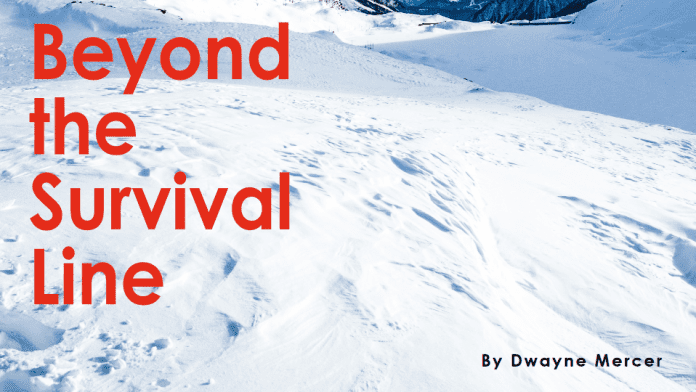 Sometimes the most important decision is the one we make right after the original decision—for example, feeling convicted in a worship service to begin reading our Bible every day. That is an important decision.

However, the more important decision is the one we make when we get out of bed the next morning. Are we going to get up early enough to read the Bible? Joshua 3:17 reads,“ And the priests who carried the ark of the covenant of the Lord stood firm on dry ground in the middle of the Jordan while all Israel crossed on dry ground, until all the nation had finished crossing the Jordan.”

The Israelite crossed the Jordan, but they never finished taking the Promised Land. The problems they faced were similar to those we face today. Life was challenging. Once they conquered a particular area of land, they farmed it to provide for their families. These everyday life tasks often derail us from following through.The Israelite faced some tough opposition. Many of the Canaanite leaders fought against them. People lied to them and formed ungodly alliances. It’s tough to keep moving forward when we’re always celebrating victories or feeling battle fatigue. We often come up short, believing “I’ve done enough.” I call this “the level of satisfaction” or the “survival line.”

I witnessed this “survival line” myself. After seminary, my wife Pam and I moved back to Georgia to plant a church. We recruited about thirty people from the sponsoring church and quickly added more from the community. We began at a day care center. After outgrowing that facility, we moved to a nearby school. In the beginning days, everyone worked hard. We had few “consumers” or “customers,” as our people saw what was at stake. They had a wartime mind-set. Everyone pulled together for the greater cause. They felt a sense of ownership.

After two and a half years, we moved into a new building and grew to the point where we could pay all the bills. At that point, something began to change. Some of our people no longer had a passion for the work. They loved the church but became “satisfied.” Subconsciously, they felt they had gone far enough. They found satisfaction at the “survival line.”

When we were a mission church, the threat and fear of not making it was real. We knew we must work hard, pray hard, and come together to be successful. However, the definition of success, for some, was survival. Once we moved into a building, fully-constituted and viable, these well-meaning, God-loving people began to rest. But God’s plans are always greater than survival.

I witnessed the same satisfaction among pastors and staff. When I was in seminary, a very well-known church set many baptism and attendance records. I happened to be working with their staff on a project when the pastor announced they were taking a year off from new ministries.

This church was at the forefront of innovation, evangelism and church growth. Fatigue had set in, and the pastor felt it would be healthier to manage current tasks and projects. This might not seem like a bad idea, but this church never regained momentum. The pastor spent the last years of his ministry at a standstill. As one friend put it, “The pastor put the church on hold for fifteen years.”

I challenge you to follow God’s path completely. God wants much more for you than you ever thought possible.“‘I know the plans that I have for you,’ declares the Lord, ‘plans for welfare and not for calamity to give you a future and a hope’” (Jer. 29:11). God wants us to keep our passionate mind-set far beyond the survival line. He wants us to continue to work, going forward to claim all the blessings He promised.

I heard a story about a mountain-climbing expedition for tourists where a guide took climbers up a tall mountain. In the middle of the trip, they stopped midway up the mountain at a resort-style cabin. This place served flavored coffees and food. It had a warm and inviting atmosphere with a large fireplace and a grand piano in the middle of a rustic-style room.

The proprietor of the shop often noticed how climbers responded to the warmth of the cabin. All the climbers came in cold and tired. The guide allowed the climbers about twenty minutes to drink their coffee and take a rest, then reassembled the group to finish the climb. In nearly every expedition, the proprietor said some of the climbers decided to stay behind. They felt they had a good climbing experience and wanted to relax and have fun.

Those left behind initially had a good time—playing the piano, laughing and talking. But as time went by and they anticipated their friends would reach the top of the mountain, they quieted. Sadness permeated each group as they realized the excitement their friends were experiencing. They had sacrificed the opportunity to have the same elation for a moment of rest and leisure.

Opportunities will come your way. Don’t hesitate when they do. Take the step of faith to seize them. Go for it!

A native of Georgia, Dr. Dwayne Mercer is a graduate of Toccoa Falls College, Southwestern Baptist, and Mid-America Baptist Theological seminaries. Dr. Mercer has served as Pastor of CrossLife Church in Oviedo, Florida since 1993. During that time, the church has grown from 650 to 5000 members, and over 4000 new believers have been baptized. His latest book is entitled “Overcoming Spiritual Vertigo.” He and his wife, Pam, have three adult children and six adorable grandchildren. For more information, visit www.crosslifechurch.com or www.drdwaynemercer.blogspot.com.