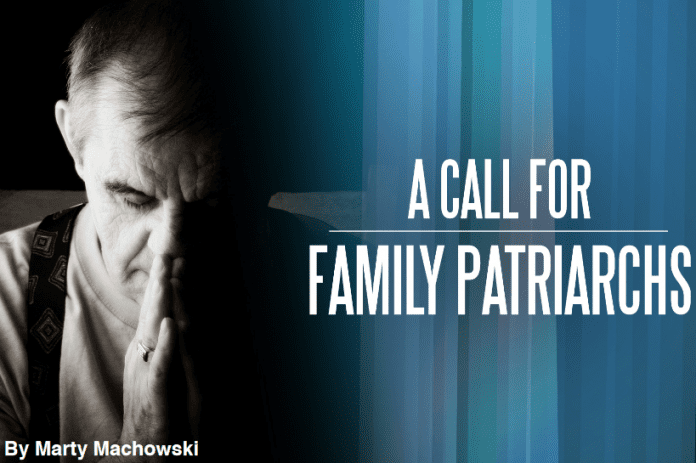 My wife Lois’ grandfather, Carl Rauch, lived to be 104 years old. He was the family patriarch. It is not just that he passed his name onto his children. He prayed for each of them, that they would be saved from their sin and took personal responsibility to make sure that each of his children and grandchildren heard the gospel. Anyone can pass on their name, but few men live to earn the title patriarch. Carl deserved the title and his example provoked many through the years to follow Christ.

I had the privilege of meeting Carl after my engagement to Lois. I couldn’t stop thinking what it was going to be like to meet someone over 100 years of age. None of my relatives had made it much past ninety. I think my one great aunt was ninety-one when she died. Prior to meeting Lois, I thought to live into your nineties was a living a long time. Now here I was traveling to meet a hero, a man who finished well and lived for Jesus all his Christian days.

Once we arrived Aunt Gertrude’s small ranch home, we were ushered into the living room to wait. Grandpa, the title his family used to call him, slept most of the day. It is hard to begrudge a guy his sleep at that age, I thought. So I patiently waited for him to wake. I took time while we waited to meet the rest of the family. We would have 15 minutes, we were told as “Grandpa tires easily.” Once again, I gave the guy the benefit of the doubt. After all he was over one hundred!

Finally, Aunt Gertrude took us in to Grandpa Carl’s bedroom. I looked down and was amazed to see relatively healthy looking man with white hair and a big smile. The fluffy bed around him seemed a bit too feminine, but I guess that is what you get after 20 or more years care from one of your daughters. She, by the way, deserves some serious treasure for her service, which she is certain to receive.

“Hi Grandpa,” my wife Lois said. Then she introduced me. “This is Marty, my fiancé. We are getting married this summer.”

He pulled Lois by the hand, drawing her closer. “How is your sister Ruth in Newtown Square?” he asked. “Are her children well? How is Conrad, Janelle, Amanda and Gretchen?”

How in the world does he remember all those names, I thought? I can’t remember them, and I’m 23!

My wife answered his questions, giving him a thorough update. Then once the introductions were complete, it was time to talk about Jesus. Grandpa Carl repeated the words he spoke year after year until his death. “Soon, I will go to see Jesus, I will fall and worship at his feet. My time is short,” he said.

Looking onto his pleasantly wrinkled face, I could tell he meant it. He longed to be with Christ more than anything in the world. But like the apostle Paul, he knew his work was not yet complete. He had a newly engaged couple to charge.

I wish now I had recorded all that he said after that. He gave us a ten-minute run through of the Bible, sharing passage after passage, always exhorting us to run to Jesus.

I assured him of my love for Christ, and my love for his granddaughter. I am certain he approved. He smiled.

We visited for a while longer, and then said our goodbyes before we left. The patriarch, in a few short minutes, had scored another victory. He won another man for Christ. Not that I was converted; I was a Christian going in, but I was far more a Christian going out. For in Carl’s deep abounding love for Jesus, I met the Savior up close and personal.

Carl had the same effect on hundreds of people. He loved people. He constantly prayed for them, and shared his love for Christ with them all. People who came in total strangers would leave calling him Uncle Carl. He was a generous man. After World War II, when Carl learned of homeless, German Christians displaced by the war, he invited an entire family to live here in the United States with him. He shared his home, gave the father and sons jobs at his machine shop, and became their family hero. Carl wrote letters to hundreds of people, many of who saved their letters. I spoke to the youngest daughter of the family who Carl welcomed into his home after the war. She said, “I saved all his letters because of how they testified to Christ. I didn’t save my own husband’s letters, but I saved Carl’s. Still today I’ll have visitors read those letters to me, and they are affected by the way the letters point to Christ.” She remembered what it was like to live with Grandpa Carl. “People wanted to be with him from the time he got up in the morning until the time he went to bed. So great was his love for Jesus,” she said.

Upon hearing her description, I wondered what it would take in me for folks to want to be around me all day because of my love for Jesus. But rather than be condemned for how far I fell short, I became inspired to press on still more. I love the Apostle Paul’s words from the book of Philippians.“

I count everything as loss because of the surpassing worth of knowing Christ Jesus my Lord. For his sake I have suffered the loss of all things and count them as rubbish, in order that I may gain Christ and be found in him, not having a righteousness of my own that comes from the law, but that which comes through faith in Christ, the righteousness from God that depends on faith— that I may know him and the power of his resurrection, and may share his sufferings, becoming like him in his death, that by any means possible I may attain the resurrection from the dead.

Not that I have already obtained this or am already perfect, but I press on to make it my own, because Christ Jesus has made me his own. Brothers, I do not consider that I have made it my own. But one thing I do: forgetting what lies behind and straining forward to what lies ahead, I press on toward the goal for the prize of the upward call of God in Christ Jesus.” (Philippians 3:8–14 ESV)

I’ll never forget my visit with the family patriarch. Years later, as I was going through a box full of my wife’s mementos, I came across a stack of letters from her grandfather. I opened one, and this is what it said:

“This is your grandpa, an old man ninety-four years old. Time to go home, but I have thirteen grandchildren, and the question comes to me: How many of them will follow in my trail? How many will I meet at the judgment seat where we will all meet some day? To how many will I hear him say: ‘Come ye blessed of my Father, inherit the kingdom prepared for you from the foundation of the world.’? My prayer is: Lord, please bring all my children and grandchildren with me into glory. I would like to meet them all there.”

At the time Carl wrote that letter, he still had ten years to go. He still had ten more years of prayers to pray; ten more years of testimony to give. I thank God I got to meet him before he died. He was my wife’s family patriarch. I pray God help me become a patriarch for my family. That is a bold prayer and a grand goal that I can only accomplish by the grace of God. It is not just a goal for me, but should be a goal for every Christian father and grandfather. One I am convinced more men should aspire to attain. God’s grace is big enough to help us all.

Marty Machowski is a family life pastor at Covenant Fellowship Church in Glen Mills, PA, where he has served on the pastoral staff for more than 20 years. As leader of their children’s ministry, he has worked for many years to develop kids’ Bible curriculum and devotional material that connect church and home. His passion is equipping families to understand the Bible as one gospel story and help them share that with their children. His latest release is The Ology which he dedicated to Grandpa Carl.