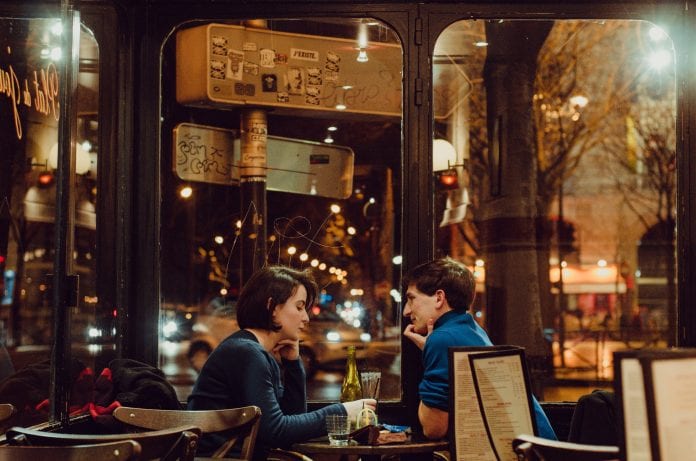 When considering a relationship with someone, it is important to consider that person’s spiritual beliefs, as well as, the way they view life and how they treat others.

Authors Lee and Leslie Strobel say the following questions are important to consider before you being a dating relationship.

1. Can he describe a specific time or era during which he received Christ’s gift of eternal life?

If he can’t pinpoint the time of his conversion, or at least the time frame in which it occurred, then it might not have ever happened. Listen carefully when he talks about his faith. Is he counting on his good deeds, religious rituals, and winning smile to get to heaven, or does he describe coming to the point of recognizing his sinfulness, turning from his own path in life, and receiving Christ as his forgiver and leader? He saved us, not because of righteous things we had done, but because of his mercy, says Titus 3:5.

2. When he talks about the future, is there room for God?

Or, does he envision a future of his own making? Does he talk about seeking God’s direction for his life? Does he have plans to serve God and the Church in some way? Is he focused on the achievement of temporal success or eternal significance? Does he want to make a difference in the world for Christ? “But one thing I do,” said the apostle Paul. Forgetting what is behind and straining toward what is ahead, I press on toward the goal to win the prize for which God has called me heavenward in Christ Jesus.

3. Is he willing to postpone immediate gratification so that greater satisfaction can come in the future?

Does he live out the biblical teaching that sacrifice and struggle often are necessary to achieve greater long-term goals? Or, does he relentlessly pursue short-term pleasure at the expense of long-term consequences? “Healthy religion calls for us to forsake self-indulgent, self-centered living and to commit instead to purity, love, giving, unselfishness, discipline, and sometimes uncomfortable lifestyles,” Collins said. “This is not intended to steal away our joy and make life miserable. In contrast, a life of devotion brings inner peace, fulfillment, and the promise of better things to come in the future.”

4. What is his attitude toward other people?

Does he use others merely as tools to get what he wants, or does he genuinely care about other people? Is he polite because his parents taught him good manners, or because he sincerely respects others? How does he treat the less fortunate in our society? Does he care about the needy? Does he have a sense of social justice that makes him want to see conditions for the poor improved, or is he uncaring or even cynical about those who have less than he does? He who mocks the poor, says Proverbs 17:5, shows contempt for their Maker.

5. Does he exhibit the traits of Jesus?

Does he forgive those who hurt him or does he enjoy nursing a grudge and plotting revenge? Is he generous toward others? Does he stand up for what’s right? Does he care about the poor and the downtrodden? My friend Gary Collins, a Christian psychologist, put it this way: “The Bible knows nothing of true Christians who are miserly, spiteful, habitually unforgiving, self-righteous, or arrogant. Nobody is perfect and we are all tempted to sin, but the true Christ-follower shows signs of becoming more like the master.”

6. Who does he spend his time with?

Birds of a feather do tend to flock together. You can learn a lot about his discernment and what he values by looking at who he shares his time with. Is he constantly pulled toward the “in-crowd” whose main activities would be anything but pleasing to God, or does he seek relationships with Christians who can encourage him to grow in his faith and lovingly hold him accountable? Do not be misled, says 1 Corinthians 15:33, Bad company corrupts good character.

7. Does he care about bringing the Gospel to those who haven’t heard it?

People whose hearts have been transformed by Christ feel motivated to share their faith with others. But someone who’s a Christian in name only sees no reason to bring the message of Jesus to those who haven’t heard it. As one ancient saint said: “I doubt the salvation of anyone who doesn’t care about the salvation of his neighbor.” That doesn’t mean he has to be Billy Graham, but it does mean he prays for lost friends and takes advantage of opportunities to engage them in spiritual conversations so ho might be able to tell them about Christ.

8. Is he honest about the little things in life?

Integrity means there’s a consistency between a person’s beliefs and behavior or between his character and creed. Does he have a reputation for being trustworthy, or is he known for trying to cleverly cut ethical corners? One woman said her boyfriend’s character was revealed when a waiter accidentally gave them the bill for another table. Instead of pointing out the error, he tried to quickly pay the lesser amount and leave – until she stopped him. “There is no such thing as a minor lapse of integrity,” said business guru Tom Peters. Seemingly small acts of dishonesty often reveal the true state of a person’s heart. The godly walk with integrity, says Proverbs 20:7.

9. Through what lenses does he see the world?

We all view life through one kind of lens or another. “The term worldview may sound abstract or philosophical … but actually a person’s worldview is intensely practical,” said Charles Colson. “It is simply the sum total of our beliefs about the world, the ‘big picture’ that directs our daily decisions and actions… Genuine Christianity is a way of seeing and comprehending all reality.” Does this individual see an artificial separation between his spiritual life and the rest of his existence, or is his faith integrated into all areas of living? Does he recognize and apply the Bible as the foundation for his whole life?

10. Does he take responsibility for his actions?

Is he quick to candidly admit when he has made a mistake or does he try to justify his actions even when they were clearly wrong? Does he gloss over his own sinfulness or blame others for things he did? “Healthy believers don’t try to pass the buck, pin the blame on somebody else, or refuse to acknowledge our actions,” Collins said. Instead, they “admit errors and sinfulness, seek forgiveness from God and from others who might have been harmed, make restitution when possible, and go on – determined not to let a similar situation happen again.”

11. Does he possess humility?

Jesus spoke out forcefully against pride, and Micah 6:8 says that true spirituality involves walking humbly with God. Does this individual always have to be right? Does he hog credit or generously praise the contributions of others? Does he constantly put himself first and think he knows better than everyone else? “[Humility] is not a false piety that denies the strengths God has given,” Collins said. “It does not involve putting ourselves down and wallowing in insecurity or self-pity. Humility is a quiet recognition that all we have and are comes from God. It is an attitude that is open to new insights and has little concern about inflating our ego or enhancing our image.”

12. What does he choose to feed his mind?

What kind of books does he read, music does he listen to, video games does he play, internet sites does he visit, and movies does he watch? Philippians 4:8 says, Finally, brothers, whatever is true, whatever is noble, whatever is right, whatever is pure, whatever is lovely, whatever is admirable – if anything is excellent or praiseworthy – think about such things. What a person feeds his mind is what he will eventually become. As Paul urged: Be transformed by the renewing of your mind.

This checklist isn’t intended to be rigidly applied. While all Christians are continually growing to become more like Jesus, this is a process that varies in pace from individual to individual and will never be completed this side of heaven. Perhaps these questions have even raised concerns about some areas of your own life that you need to address before God. In any event, raising these issues can help us diagnose the general condition of the other person’s Christian life. Don’t flinch from being honest as you seek answers. Keep in mind that self-interest — such as romantic feelings toward the other person — can fog otherwise clear thinking.

Atheist-turned-Christian Lee Strobel is the former award-winning legal editor of The Chicago Tribune and best-selling author of more than twenty books. His classic, The Case for Christ, is a perennial favorite which details his conversion to Christianity. His recent release, The Case for Grace, just won the 2016 Nonfiction Book of the Year from the EPCA. For the last twenty-five years, his life’s work has been to share the evidence that supports the truth and claims of Christianity and to equip believers to share their faith with the people they know and love.